One of the most picturesque cities in Greece, Kavala, is amphitheatrically built on the slopes of Mt. Symvolo overlooking the Aegean Sea and the Island of Thassos. 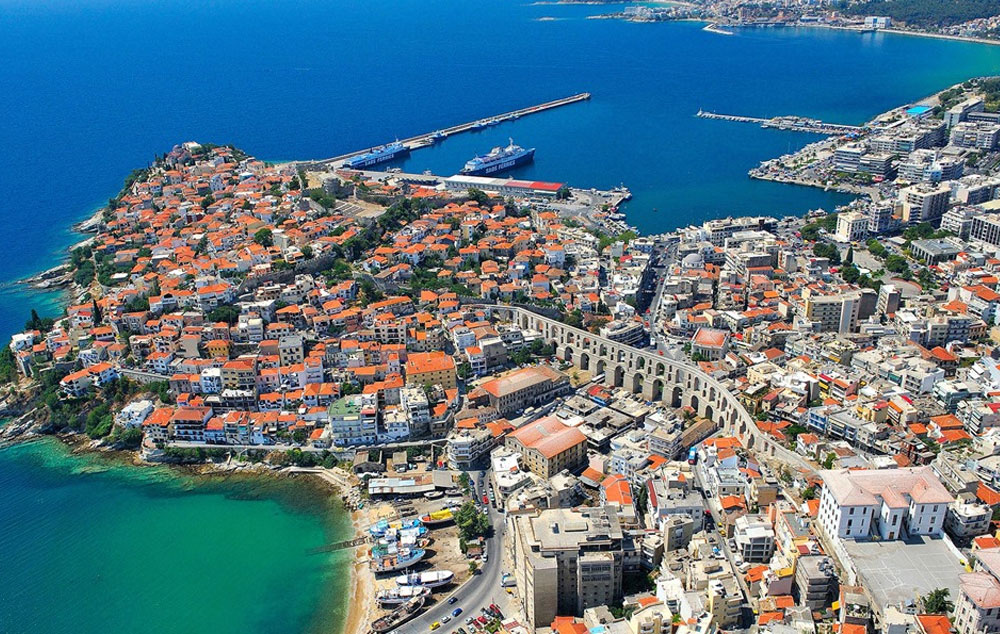 Welcome to the blue lady of the North!

One of the most picturesque cities in Greece, Kavala, is amphitheatrically built on the slopes of Mt. Symvolo overlooking the Aegean Sea and the Island of Thassos. Its geographical location, its natural port and its adjacency with gold-bearing Mt Pangaion make Kavala one of the oldest coastal towns, with its traces being lost in the mists of prehistory.

It was to this town that the Apostle Paul came to teach the message of Christianity for the first time in Europe in 49 AD, and baptised Lydia, the first European Christian woman, on the banks of the River Zygaktis.

Kavala boasts a unique character reflecting its recent past: neoclassical mansions and big tobacco warehouses evoke the memory of a distant past when a wealthy bourgeoisie was dominating the city. In the “Mecca of tobacco” as Kavala was named in the past, thousands of tobacco workers, male and female, earned their living. Their faces will remain alive for all eternity thanks to the black and white photos adorning the walls of the city’s Tobacco Museum. The city’s breeze sweeps through its historic buildings, which perfectly reflect the city’s modern character.At the cobblestoned, lined with palm trees port, stand one next to another modern buildings and fish tavernas, while fish boats cast their reflection on azure waters.

Walking through the picturesque lanes of the Old Town, one can admire the wonderful architecture of theImaret, one of the most distinctive examples of Ottoman baroque in the world, a religious, educational and charitable institution which has now been converted into a hotel. The grand medieval Fortress, dominates the acropolis of the peninsula of Panagia.

Historical highlights include the nearby UNESCO World Heritage Site, the Archaeological Site of Philippi, Dikili Tash – the oldest Neolithic settlement in the Balkans, the trademark of the city,Kamares thatwas actually the aqueduct of Sultan Süleyman the Magnificent and quality museums.

Kavala offers a gateway to one of the most beautiful islands in Greece, verdant Thassos as well as to other northeastern Aegean Islands.

Complete your city break with a brief escape at the picturesque city of Xanthi, Porto Lagos,a small scenic village ideal for bird watching,Nestos river delta, one of the most important water biotopes in Greece and Europe or a regenerating spa the Krinides Clay Treatment Centre.